Veronica is the mother of 4-year-old Andreas-Rares who is living with Allan-Herndon-Dudley syndrome (AHDS), an extremely rare genetic disorder also known as MCT8 deficiency.

Veronica is also one of the first graduates of the EURORDIS Winter School on Scientific Innovation & Translational Research, the first edition of which was held last month in Paris.

AHDS is a genetic disorder that only affects boys. Children with AHDS struggle to support their heads, are affected by hypotonia and mental and motor delay, and subsequent health complications may lead to a very early death. There is no cure and no treatment. Orphanet estimates a total of 320 patients are living with the disease around the world.

Here Veronica tells her family’s story of living with AHDS, from diagnosis to dealing with the disease on a daily basis. She also speaks of her recent experience as a student at the EURORDIS Winter School. 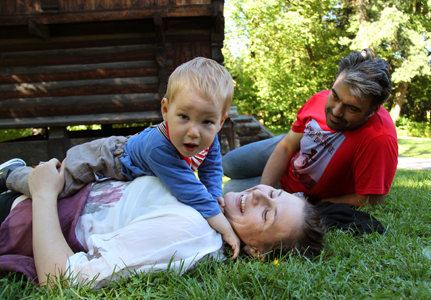 Our entire world came crushing down with Andreas-Rares’ diagnosis.

The syndrome is virtually unknown to medical professionals. That, along with the fact that there are very few tests that can point to this syndrome, makes it all the more difficult to diagnose and as a consequence lots of patients are being misdiagnosed.

Andreas-Rares’ diagnosis was one of those few moments in life that shaped our future. We, as parents, had two big options in front of us: either accept the situation as a given, retain no hope and give up the fight OR stand up, stand our ground and fight for his feeble chance of rehabilitation, however long and difficult that road may be.

I guess, my husband and I, we’re both pretty stubborn people as the thought of giving up has never even crossed our minds. And this is how our journey began.

We started reading extensively about anything and everything that could help him, even remotely connected to his struggle. We acquired knowledge and expertise in areas we had never known to exist before: pharmacokinetics, disease mechanisms, drug delivery systems, several kinds of therapies, special needs equipment, building our own special needs equipment designed for his particular needs and so on.

Andreas-Rares started therapies at a very early age. He is now doing five kinds of therapy, ten times per week. All these therapies are meant to delay the onset of more severe symptoms and increase his quality of life. However, we never stop hoping for progress and he never disappoints. He manages to sit with minimum intervention, stand and even place steps and lifts himself off the ground by pulling on things. He is getting better at using his hands as well, he can build towers, sort cubes by size and even clap his hands. This is why he is our superhero!

The first patient organisation for AHDS

Through the effort of a handful of dedicated parents from our tiny worldwide community, the first patient organisation for children affected by AHDS emerged recently. The MCT8-AHDS Foundation aims to raise interest among the research community with the hope of finding a cure for this ultra-rare genetic syndrome, to raise money in order to be able to support research and last but not least, to offer support to patients and their families. For more information on the MCT8-AHDS Foundation visit the organisation’s Facebook page or get in touch with me at: veronica@mct8.info.

Join the RareConnect online community for Allan-Herndon-Dudley syndrome to connect with other people living with AHDS. 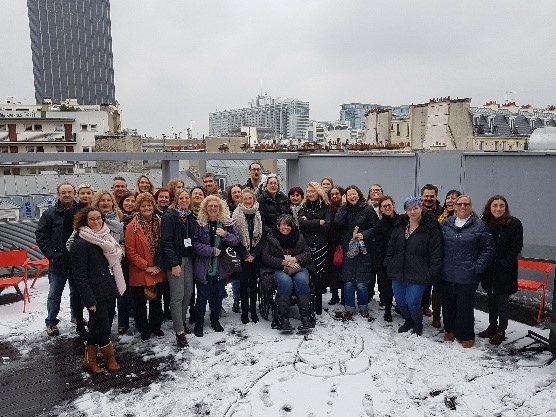 The EURORDIS Winter School was an amazing opportunity to learn. Both the subjects addressed and trainers offered more than just information, they offered knowledge. The transparency and the openness of the speakers made communication easier and promoted a positive environment for exchanging ideas and cultivating curiosity.

As a patient advocate for an ultra-rare genetic disorder, having a basic knowledge of genetics along with a good understanding of how far medical research has developed is vital. The EURORDIS Winter School lectures addressed exactly this need in an approachable and flexible manner, while visits to the laboratories offered a different perspective on medical research that made the entire learning experience all the richer. In addition, an important aspect that should not be overlooked is the opportunity to network, exchange experiences and ideas, and plan collaborations for the future with other EURORDIS Winter School participants and trainers.

The EURORDIS Winter School is one of several trainings that make up the EURORDIS Open Academy.

The application process for the 2019 edition of the EURORDIS Winter School will open in summer 2018. Details on how to apply will be posted on this page.

This site is registered on wpml.org as a development site.